Inspired by Judy Chicago, I’ve created a virtual dinner party: One category of my blog will be dedicated to honouring women who I want to be a part of my soul community. Each woman at my virtual table has a lesson to teach, even if it’s simply to inspire us with her ability to hold greater aspirations for ourselves than we’d ever thought possible. Each one will be a manifestation of the Goddess, a Wise Woman, a pilgrim on the road of the Sacred Feminine. I want to share the wisdom of these women as part of my community of support.

As we draw closer to Christmas, it seems appropriate to bring one of the key players of this story to the table. (Yes, my Catholic roots are showing, but bear with me.) 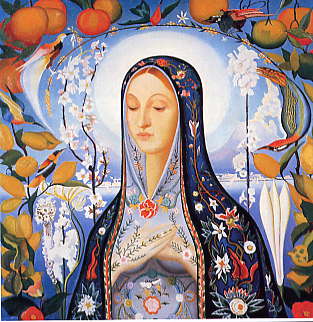 The Virgin, 1926 by Joseph Stella The Brooklyn Museum

The Virgin Mary is revered around the world as the woman who miraculously conceived a child by the God.

What does that mean to us today? Why does she continue to fascinate in our cynical times? What could she have to do with you and your health (regardless of your religious leanings)?

It all gets back to the original meaning of the word virgin.

We use it simply in the context of never having had sex. Depending on how old you are and what your cultural/social environment is like, it can even be a stigma or badge of honour.

There have even been times when I’ve speculated with GFs as to whether it “grows back” after a certain time without. Kind of how your insurance record clears after so many years without a claim.

Nowadays, we refer to any type of neophyte as a virgin: a night club virgin, a camping virgin. I’m a Twitter virgin. A friend of mine just lost her podcast virginity. Way beyond the sexual context, this virgin – male or female – is someone who’s never done…something.

But dive back to the ancient roots of the word and you find an independent woman, not answerable to any man or child. Though I don’t know the precise origin of this word, it speaks to me of a matriarchal society where woman was respected as an important, integral, valuable part of society.

Hence, Elizabeth I is famous as the Virgin Queen. We know she was far from sexually untouched. She was a virgin because she was a woman unto herself – sovereign over her own life as well as her king(queen)dom. And a strong one at that!

I also think about the virgin goddesses of mythology: Venus, who emerged fully-formed on her half shell; Athena who sprang from Zeus’ head in full armour, wisdom incarnate.

Put these 2 concepts together and you get my vision of who the Virgin Mary is: (Yes, this gets to my point!)

She’s a woman who had her purpose whispered in her ear by a messenger of the Divine, and she stood by that purpose no matter how difficult or painful it was. Though married to Joseph and mother to other children, they didn’t detract from the truth of who she was.

Mary acted as a conduit.

She was the vessel through which spirit became flesh. She represents this creative capacity of every woman: to have a fully-formed expression of the Divine emerge from her body. Now that’s a miracle!

Worship of Mary was a continuation of goddess worship under the strong thumb of Christian paternalism. She was the beacon that held women strong to their purpose – though lost and hidden for centuries – until it was time for them/us to emerge.

Standing firm in our own purpose, which as a collective means giving permission to each other to heed the call whispered from the Divine. Perhaps this means bearing children, or bearing the burden of leading a campaign for female education. Maybe you write plays, or maybe you write contracts. Maybe you design jewellery or websites.

The what doesn’t matter. It’s the opening of yourself as a vessel, as a conduit to share yet another aspect of the Divine that does. And that enhances your health – your fullest expression – in more ways than you can imagine.

I’ve had some ideas swirling around my consciousness for a while now. It’s high time I gave birth to their reality. Too unformed yet to share any details, I can give you a hint: the dinner party theme plays a big part.

So tell me, what’s been whispered to you? When you share in the comments, you open the possibilities for others.

Share this post with the independent women in your life by clicking one of the pretty green buttons at the bottom of the page.

No angels whispering in your ears lately? Maybe try listening to those menstrual cramps, that anxiety, the pain in your knee or the restlessness in your soul. Not exactly Gabriel in robes and glowing wings, but there’s a message in there for you to heed! (Contact me if you need an interpreter.)